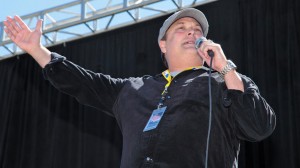 From NBC BAY AREA: Bust out the Kleenex. A longtime San Francisco comedy celebration is going away. On Wednesday, March 26, the Romane Event will have a blow-out ninth anniversary show before organizer Paco Romane says goodnight to the monthly showcase.

“I’m sad and excited all the same time,” Romane said about his “grand hiatus” show. “The feedback from a lot of comics has been, ‘Please don’t stop.’”

That’s not surprising because the Romane Event at The Make Out Room, 3225 22nd St., has seen hundreds of amazing comics take the stage, and many headliners are returning for the farewell show.

Bentley, who was voted SF Weekly’s Comedian to Watch last year, has performed at Romane Event a handful of times, and he’s excited to come back for the grand hiatus. But he and Romane met under less than friendly circumstances, Bentley said.

“I was performing an open-mic and doing pretty well. I was doing crowd work. Generally, people who know me know that’s part of my act. I do it pretty well. I didn’t know him. He was dressed in some kind of red get up. I said something to him; then he just came back at me. That was the first time that someone had topped me,” Bentley said. “I went, ‘Who is this jerk?’ I’ve got to find out who he is. Then he was introduced as Paco Romane. I said, ‘Oh, Paco Romane. He does the Romane Event.’”

“He’s a supreme improviser. I’ll always remember the one night that Paco destroyed me.”
Bentley calls the line-up, for March 26, a murderer’s row of comics; so everyone will be bringing their A-game.

“I want to celebrate Paco’s accomplishments, but I really want to kill,” he added.

Romane is regarded as one of the few comedy show bookers who looks for—and looks out for—new comics. Bentley said Romane has been particularly helpful toward female comedians. “That’s truly rare,” Bentley said. “A lot of women get railed on. He’s really supportive.”

For Romane, it’s funny first, then diversity second, when putting together a quality showcase.

“I always try to have a balanced line-up because I felt like women were underutilized and underappreciated and under booked,” Romane said. “I feel like funny is funny, and it doesn’t really matter. I certainly didn’t want just a bunch of dudes because that’s boring.”

Romane is expecting to be roasted a little by the other comics that night, as they honor and rib him a bit. He’s saving the last laughs for himself though.

“I’m giving myself the last slot. I’m going to say my goodbyes. I’ve had some of the same audience members for nine years, and they’ve not missed many shows,” he said. “It really is like a family. It’s one of the things I’m proudest about. It’s been an incredible journey.”

Romane Event fans will still be able to keep up with Paco though. He’s going to be at the Punchline in SF next month with Jake Johannsen, and he’s also putting together an unusual comedy tour with just “nice” comedians.

Tickets for the Romane Event are $7 in advance or $10 at the door, and you can find more info about the show at PacoRomane.com.

Corey Andrew has been interviewing comedians and writing about comedy for the last decade and a half. He recently published the book, “Laugh Lines: Conversations with Comedians.” Corey was a writer and performer with Midwest sketch troupe, The NonProphets, before moving to the Bay Area with his family several years ago. If you have ideas for future columns about comedy, you can send them to [email protected] or follow him at twitter.com/coreyshame.