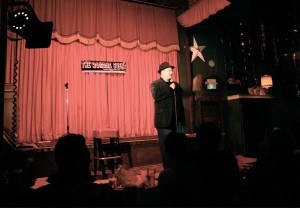 From SF BAY GUARDIAN by Cheryl Eddy: Seems like we’ve been facing a lot of “end of an era”-type announcements around San Francisco lately, but the popular Romane Event Comedy Show — ending its monthly Make-Out Room stint March 26 — is closing up shop by choice.

“After nine years, I feel like I’ve checked all the boxes I need to check on my to-do list, with creating a comedy show of this type,” host Paco Romane says. “I have a lot of other comedy projects that I want to devote time to. However, the Romane Event has been very special for me. I’m sad to end it.”

That said, his final event is notably dubbed “The Grand Hiatus,” so fans need not completely despair. “I will be bringing it back as a one-off once in awhile,” he promises. “I had originally wanted to call the last show ‘Good-Bye, Farewell, and Amen,’ but I thought that seemed a little decisive.”

At this point, the Romane Event has been around longer than most of the restaurants on nearby Valencia Street. “In 2005, there were only a handful of comedy shows that were not at a comedy club, like at the Brainwash and Club DeLuxe,” Romane remembers. “I wanted to get out of the comedy club scene, and do something in a bar where you could have different set lengths, variety acts, up-and-coming comedians, and comedians that were well-established.”

Romane, a longtime member of comedy and filmmaking troupe Killing My Lobster, was first the host of KML’s cabaret shows. “I stopped doing that, but I kept the variety-show aspect for the Romane Event. The problem is, it’s hard finding quality variety acts,” he says. “Then, I was voted ‘Best Comedian’ in the Bay Guardian in 2005. And that was before I did stand-up! People started to come to see the Romane Event, and me, so I started doing stand-up because I won best comedian. And that’s how I got to know, and book, more comics.”

Since 2005 — with the exploding popularity of SF Sketchfest, and the alt-comedy scene in general — Romane’s noted huge changes in the local comedy climate.

“I think comics realized that by producing their own shows, they’d get a lot of name recognition out of that. You get a chance to book friends, and then you get booked as well,” he says. “Back in 2005, there weren’t a lot of stand-up comics. That group back then consisted of, like, Moshe Kasher, Ali Wong, Chris Garcia, and Kamau Bell. People who have done really well for themselves. It was a smaller group who took the comedy thing a little more seriously, I think. And in 2005, it wasn’t really hip to be a comedian. Now, it seems like everybody is a comedian.”

When asked if the Internet has more or less everything do to with the comedian population explosion, Romane is quick to agree.

“Yes. It is the reason,” he says. “Facebook alone has helped generate so many comedians. The alt-comedy scene became mainstream, and that really brought people like Patton Oswalt to the forefront. And the advent of YouTube, which wasn’t around when I started my show, has really generated people wanting to get into the comedy scene. Then you have a resurgence of comedy clubs, comedy schools, and open mics. There are a lot of avenues for people just to try.”

Like musicians and other 21st century artists, comedians have embraced social media as an important marketing tool. “A strong online presence is important,” Romane says. “It shocks me when I talk to comedians and they don’t have a website, or I try to book somebody and they don’t have a video up, or even a blog. It doesn’t make sense. You have to break through some way, get through all the white noise of everyone else. I think that’s why Vine and Twitter, things like that, really help a lot of people.”

Romane uses social networking (“a multi-headed beast, but the best thing to happen for artists — back in the day, I used to walk around the Mission taping up fliers, and you don’t have to do that anymore!”) to announce shows, of course. But he also uses it to try out jokes and “maybe brag about something, like when I was on Comedy Central’s Drunk History San Francisco last year.” (Fun fact: Parts of the episode were filmed in Romane’s Haight apartment. Jello shots were involved.)

“One of the things that the Romane Event is well-known for is my booking,” he says. “I’ve always put together interesting shows — comedians you wouldn’t expect to see in a line-up together, but their senses of humor all kind of match.” The big send-off features the “Dirty Dozen,” some of his favorite performers from years past, doing five-minute sets: Marga Gomez, Joe Tobin, Lydia Popovich, Scott Simpson, Kaseem Bentley, Dhaya Lakshminarayanan, David Gborie, Sean Keane, Imaginary Radio, Samson Koletkar, Kevin Munroe, and Stroy Moyd, plus special guests.

Romane’s post-show plans include gigs at the Punch Line Comedy Club (April 16-20); he’s also writing an animated series and working on a live talk-show project, and has been kicking around the idea of turning 1996’s Fargo into a musical. But his last monthly show, the Romane Event’s nine-year anniversary, is his main focus at the moment. “It’s going to be a lot of fun! But it’s going to be weird to not have to work on it each month. It’s going to be interesting to have some spare time for once.” 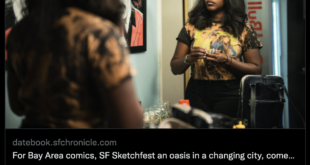