Bring the funny to make the money! Learn valuable voice-over and comedy skills!

In advertising comedy is king. This class will prepare seasoned comedians and non-comedians alike to take their comedic reads to the next level!  Ad professionals know a clever, well-delivered joke is key to a memorable commercial. It’s also not easy to execute.

So how do you bring the funny to your VO read – even when the copy isn’t necessarily that funny in the first place? In this two-part class, we’ll teach you the construction of a comedy ad and the techniques to craft a memorable, powerfully funny read that gets laughs and gets the attention of clients. Calum and Paco have been working in sketch comedy, standup, improv, and voice over for over two decades. Let them guide you to a funnier read that books you the job!

In Punch It Up you’ll learn comedic tools and language along with our P.U.N.C.H system that will bring challenging comedic voice-over scripts into focus. We use real voice over scripts from radio and television.

When: 2 classes: August 18th and August 25th
Time: 6:30pm – 9:30pm
Cost: $150 (Venmo: @Paco-Romane or PayPal: paypal.me/pacoromane)
Where: Zoom
How: Please include your email address with your payment so we can share links, scripts, and materials for the class with you, and can answer any questions you might have. 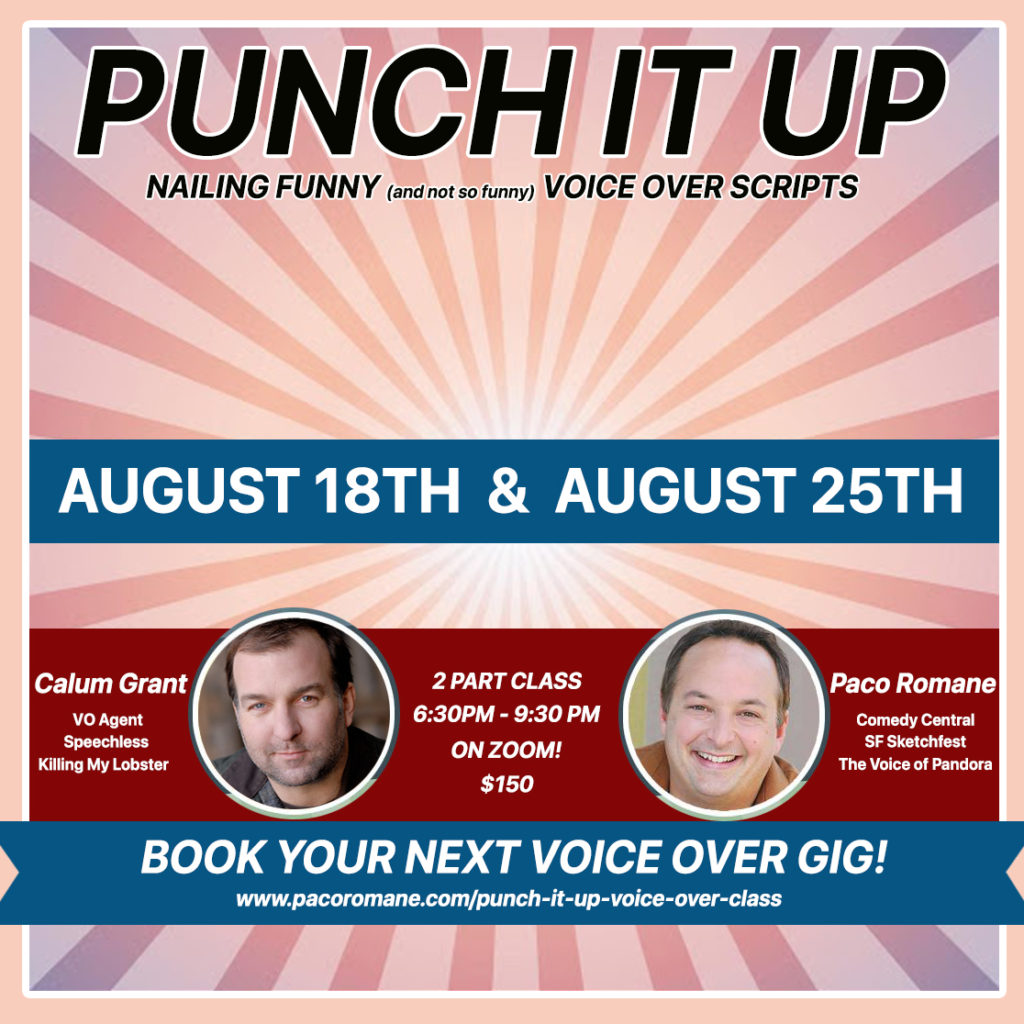 Paco Romane is an award-winning comedian, actor, voice over actor and writer and has appeared on Comedy Central, NBC, CBS. He can be seen or heard in national commercials and films.  As a comedian, Paco headlines across the country as well as appearances in numerous comedy festivals. He is the “voice” of Pandora.com and has recorded hundreds of voice-over sessions for brands as varied as VISA, Comcast, McDonald’s, and WebEx.

Calum Grant is a highly sought after voice-over talent as well as a voice-over agent and director. Calum is also an accomplished comedic actor who is a frequent presenter in Speechless, the hit PowerPoint improv comedy show.

“The One That Got Away” featuring Paco Romane as Casey Kasem