KPIX CBS throwing us some love!

Sup Doc is back in SF Sketchfest for our third time and we couldn’t be happier! This time around we decided to try something different and unique. We have designed a highly competitive (not really), informative (probably not) and fun (definitely) quiz show centered around documentaries! We invited some of our favorite and hilarious challengers to see how they rank among the worlds greatest documentary quiz show champions (as of today there are none).

So we are equally pleased that CBS KPIX hand-picked us out of an amazing line-up of shows and performances to highlight our quiz show!

The fest kicks off on Thursday night with an opening night tribute to iconic Bay Area stand-up and actress Margaret Cho. First coming to fame on SF comedy club stages, Cho starred in her own groundbreaking network sitcom “All American Girl” in 1994. Though it was short-lived, the comic would go on to create other programs including “The Cho Show” on VH-1 and the Lifetime series “Drop Dead Diva.” She also has built a massive, loyal following with her stand-up tours, Broadway solo shows and her outspoken support of women’s and LGBTA rights. She will be interviewed onstage at the Marines’ Memorial Theatre by former Rolling Stone writer and editor, author and current SF Chronicle columnist Ben Fong-Torres (Thu/10, 7:30 p.m. $25-$35). Thursday will also feature left-field local comic Brent Weinbachhosting “A Very Weinbach Opening Night” with his younger twin brothers, variety show specialists Max and Nicky Weinbach at the Gateway Theatre (Thu/10, 8 p.m. $25) and James Andomian and the Jerks, a stand-up show headlined by noted comic and impressionist Andomian at Cobb’s Comedy Club with appearances by Anthony Desamito, Atsuko Okatsuka, Chris Sandiford and host Andrew Michaan (Thu/10, 8 p.m. $25).

On Friday, the festival ramps up activity with 25 different events over the course of the evening. Highlights include a conversation with “Kids in the Hall” cast members Dave Foley, Kevin McDonald, Mark McKinney and Scott Thompson in conversation with Paul Myers, the author of the new biography, “Kids in the Hall: One Dumb Guy” followed by a screening of their cult classic film Kids in the Hall: Brain Candy at the Castro (Fri/11, 7 p.m. $25-$35), a live staging of the popular podcast Throwing Shade with Erin Gibson and Bryan Safi featuring guests Sabrina Jalees and the aforementioned Cho at Cobb’s Comedy Club (Fri/11, 7:30 p.m. $25-$35), a night of stand-up with comic twins the Sklar Brothers, Daniel Van Kirk and Oakland favorite Allison Mick at the Brava Cabaret (Fri/11, 8 p.m. $22 SOLD OUT), local all-star ensemble the Red Room Orchestra presenting another evening of music from “Twin Peaks” at the Chapel (Fri/11, 9 p.m. $35-$40) and comedian Todd Berry returning to SF Sketchfest with his “Crowd Work Tour” consisting of riffing on the audience instead of simply telling jokes at the Swedish American Hall (Fri/11, 10 p.m. $30).

Friday will also mark the first presentation at the Speakeasy of a special immersive night of comedy patterned after the interactive theater regularly held at the venue by the Boxcar Theatre. In addition to each night featuring a different headliner performing two shows in the Mainstage Cabaret (actress/comic Janeane Garofaloand a cast of friends performing sketches and stand-up are featured on Friday), but attendees can delve into a “choose-your-own-adventure” style experience throughout the Speakeasy, engaging in impromptu encounters and conversations with performers, working with comics to craft jokes and interacting with strolling improvisers, getting pulled into intimate comedy sets and more (Fri/11, 7:30 p.m. and 9 p.m. $125). Other headliners on opening weekend include stand-up and actor David Cross (“Mr. Show,” “Arrested Development”) on Saturday and Dana Gould along with Cross’ “Mr. Show” partner and the star of “The Office” and “Better Call Saul” Bob Odenkirk on Sunday.

Saturday offers up the first full day of programming for this edition of the festival, presenting afternoon events like perennial guest Jimmy Pardo hosting his podcast “Never Not Funny” at the Gateway Theatre (Sat/12, 1 p.m. $25), a tribute to talented hand-drawn animator Bill Plympton at the Brava Theater Center (Sat/12, 4 p.m., $25) and a return engagement for local stoned comic Doug Benson and his popular podcast “Doug Loves Movies” at the Gateway where he and some famous surprise comic friends talk about films (Sat/12, 4:20 p.m. $25) before moving into a packed evening of shows.

Sunday gets an early start at 9 a.m. as actor and comedian Ron Funches hosts “Brunches with Funches,” an encore of a food-focused stand-up performance he first unveiled at SF Sketchfest three years ago and the inaugural edition of the Comedy Clusterfest at the SF Civic Center in 2017. Admission at Cobb’s Comedy Club will include a brunch buffet prior to sets from Funches and guests Hari Kondabolu and Emmy Blotnick (Sun/13, 9 a.m. $60). Another unusual morning presentation specifically geared towards children will be “Story Pirates,” a live onstage version of the popular family podcast that creates a hilarious musical sketch comedy show based on stories written by kids at the Marines’ Memorial Theatre with special guest David Foley from “Kids in the Hall” and “News Radio” (Sun/13, 11 a.m. $25).

Later in the afternoon, Marines’ Memorial holds a tribute to comic and television host W. Kamau Bell (of CNN’s “United Shades of America” and the acclaimed FXX series “Totally Biased with W. Kamau Bell”) with bell being interviewed by fellow stand-up Kondabolu (Sun/13, 4 p.m. $26-$35) while Doug Benson returns to the Castro to host “The Benson Interruption” featuring the comic and a panel of unannounced friends making hilarious live commentary on Fifty Shades Freed, the preposterous final entry in the Fifty Shades of Grey film series (Sun/13, 4:20 p.m. $25). Other can’t-miss shows later in the evening include the cast and crew of Cartoon Network’s “We Bare Bears” including creator Daniel Chong and comedians/actors Bobby Moynihan (an “SNL” cast member for nine years), Eric Edelstein and Cameron Esposito talking up the animated series at Marines’ Memorial Theatre (Sun/13, 7:30 p.m. $25-$35) and the sure to be viciously funny roast of legendary local drag queen Peaches Christ featuring actresses Clea DuVall, Heather Matarazzo, Mink Stole and Cassandra Peterson (aka Elvira, Mistress of the Dark) along with fellow drag queens Heklina, Jinkx Monsoon, Sister Roma and Roast Mistress Coco Peru unleashing verbal fury on the roastee at the Castro (Su/13, 8 p.m. $30-$70). For a more detailed listing of events and information on how to get tickets, please visit the San Francisco Sketchfest website. 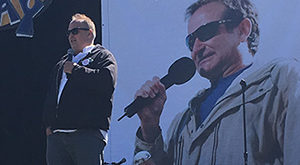 On Comedy Day, Robin Williams lives on in meadow that now bears his name Marga …