On Thursday, March 10th at Doc’s Lab one of  SF’s newest shows will be debuting in San Francisco! The SF Roast Rumble is a raw, joke-to-joke event that pits comedians versus comedians in a winner-takes-all Battle Royale. It’s intense, unpredictable and very funny.
Featuring San Francisco’s best pun pugilists getting verbally violent to decide who is the champion. Many will roast but only one comedian will be crowned the The Roast Champion!

Read all about the Roast Rumble in this article from the San Francisco Chronicle!  I’m still riding high on the turnout and how well of the comedians did. Check out the great photos and read the article! Sold out show and everyone really enjoyed themselves.

Some of my favorite quotes from the article!

“A couple in front of me ordered a beautifully plated ahi appetizer, which they ate while listening to vagina insults.” 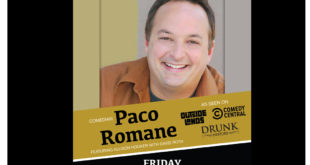